How Much Does It Cost To Stay In A Castle In Scotland?

Romance does not drip from Scottish Castle walls, instead it roars at you from the landscape. There is a clarity in the romance of a Castle in Scotland. Less swirling mists and clouded turrets and more a practical, sturdy stateliness. These castles do not require the boost of royal prestige or expensive plummage, though these exist too. Instead, they have the ultimate romance of heart-shocking beauty in full surround. In Scotland your brain stumbles,  it pauses trying to catch up with the heart. Sometimes, words are pointless. Except poetry, only poetry here.  The cost of a Castle stay in Scotland is measured in the heart-space. In pragmatic Scottish style Castles here shout with functional home-pride, allowing the landscape to take the glory. “I am more than fine, but look behind me, put that in your wee gob and try to swallow!” The cost to stay in a Castle in Scotland is as varied as the buildings themselves but you receive beyond mere value.

Stay at the 5 star Achnagairn Castle Estate near Inverness from £120 per night in low season where the motto is          ‘ Escape the Ordinary’. The present castle was built in 1812 but an orginal building on this site dates back to the 17th century. A stone in the library fireplace is dated 1663. The vaulted ballroom is beyond the ordinary, gifted by the owner as a daughter’s 21st birthday present. During WWII the castle was utilised as a hospital, with the ballroom transformed into a ward. While soldiers convalesced they devised a game, tossing each other’s clothes onto an elephant tusk in the high vaulted walls. Escaping the ordinary. Cuddled by trees and leaning over the lochside, Fonab Castle is another affordable 5 star castle hotel . Rates here range from just under £200 per night during low season. This commanding castle blends its solid past with a contemporary glass fronted view of Loch Faskally, woven with salmon, brown trout, grilse and pike. Fonab is just over a mile from the town of Pitlochry, famed for its distinctive distilleries and theatre festival. Drama in the landscape and on stage. Marooned by the shored edge with its foundations wave lapped by the North Sea, Ackergill Tower Castle is a 15th century nod to solidity. Dip your head to its serene authenticity.  You will not feel part of the clamoured world here. It is a place removed. The cost to stay in this Scottish Castle can be under £200. The smallest self-catering cottage ‘The Smiddy’ starts at £350 per night. Return to knee grazed years, planks nailed to branches with dangling rope ladders and climb into the adult dream come to life – ‘The Treehouse Retreat’ at £1000 per night.

This Castle has a Billiards Room, its own Bothy and an Opera House. The Old Smoking Room boasts an open fire, lulling flames and drawn curtains to paralyse all stress. Clay pigeon shooting, golf and archery can all be arranged from the castle, with bonfires on the beach afterwards and the extra warmth of a hot whisky. At Ackergill, the open spaces move the mind and time shifts. You can rent Fonab Castle, Auchnagairn Estate and Ackergill Tower Castle for exclusive use also.

Kincraig Castle, once home of the Mackenzie clan, is just over 20 miles north of Inverness, bordering Cromarty Firth. This is an unpretentious country mansion renovated in the 20th century from sandstone to a white-harled Scottish baronial manor. Automatically discard the stresses of urban residue and glut as you move past each tree in the driveway like a stripper with each article of clothing slowly peeled off. Suspend all else in the branches and open fields around Kincraig.

The lounge here is renowned for delaying guests from dining in the award winning restaurant. In the evenings the rich darkness unfurls from wood panelling and whispers with the open fire. In daylight, lingering is unavoidable too as the room changes to bright, flower filled warmth. The cost to stay in this Scottish Castle ranges from under £200. You will leave enriched by the authentic welcome and stately country tranquility.

Comlongon Castle lies on the edge of the Southern Uplands in Dumfries and Galloway. It is 20 minutes from Carlisle and less than 2 hours to Glasgow, Edinburgh or the ferry to Ireland. This central location with luxurious facilities, set in over 120 acres with lakes and woodland has ensured Comlongon’s 5 star reputation in creating high quality private functions and celebrations. The cost to stay in this Scottish Castle in one of the 4 poster bedrooms can be less than £200 per night. Classic rooms like the ‘Maids Chamber’ will cost £159 in 2017 and Suites start at £179 or why not book this Castle for exclusive use.

Comlongon Castle dates from the 15th century and features wonderful displays of historic banners, suits of armour and medieval weapons. Shackles are embedded in a wall, kidnapped individuals imprisoned here after raiding parties. The captors demanded ransom to release the victim. You might also see history float by as the ghost of Lady Marion Carruthers who died after falling from the lookout tower. History records suicide, though foul play suspected. Marion tried to reclaim her inheritance of Comlongon Castle but failed. No grass grows where she fell. The welcome at Glengarry Castle is legendary and enormous – a St.Bernard greeting without drool! This Highland mansion seems a home more than a hotel. At Invergarry on the shores of Loch Oich, linked in a line of lakes between Loch Lochy and Loch Ness, home beckons. Personable and charming, you will try to extend your stay here almost as soon as you arrive.

The cost to stay in this castle during peak season between mid May and mid September starts at £145 and the rest of the year from £125, with single rates starting at £85.  Glengarry closes in early November and opens in mid March every year.

It is only 40 miles to Inverness, 55 miles to the Isle of Skye and 25 miles to Fort William and Ben Nevis. The landscape here slows the brain to a standstill and the heart takes over. Drive from Glengarry Castle in any direction and the Highlands will seep into your soul, grip hold and clamp permanently. 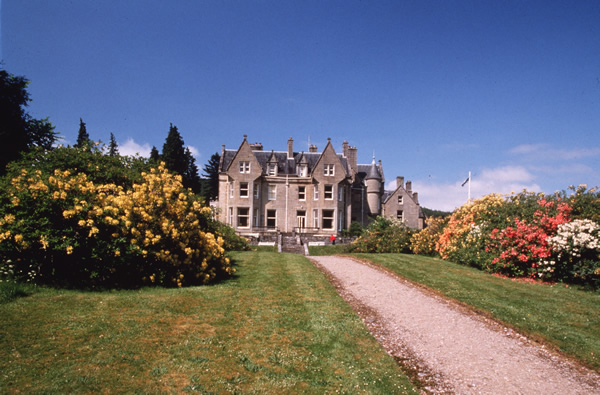 Scotland’s oldest inhabited castle is 13th century Dalhousie, less than 10 miles outside of Edinburgh. Home to the Ramsay clan, they retained possession of their castle longer than any other family in Scotland. Entry to the castle was originally over a drawbridge and deep dry moat. The recesses of the mechanism for raising the drawbridge are still evident above the main door.  Here you will also see rope marks where prisoners were lowered down to the dungeon. The cost of a Castle stay in Scotland paid in different currency in different times.

Many of Dalhousie’s bedrooms have historical themes and some have four-posters. The cost of a castle stay here can start from just over £100 for a classic double. Staying here means you can easily avail of the onsite falconry which boasts species of birds including buzzards, owls, eagles, hawks and falcons. Try a hawk walk around the grounds of Dalhousie or an encounter with an owl. Feel the rush of wing as they return elegantly and dramatically to your gloved hand.